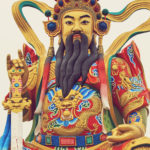 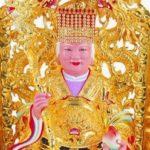 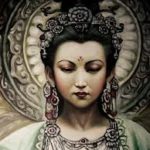 Folklorist and mythologist extraordinaire , Jack “The Agnostic” Garcia continues the GRR Season Ten premiere with sacred stories that mingle both Taoist and Buddhist spirituality.  First off, its the Ba-Xian (The 8 Immortals) , divine beings who were once mortal but achieved eternal life via their exemplary lives.  The 8 immortals were very popular and people carried amulets , charms and talismans formed from their symbols.  Next up, its the significance of the Silk Road trade routes which led to cultural and intellectual enrichment for both the East and the West.  Told via the tale of Lady Silkworm which incorporates a far more primal story with the origins of silk.  Next up, its the cult of the Jade Emperor and his consort, Wang-Mu (The Queen of the West), the living embodiments of Heaven and their vast celestial civil service that keeps the universe in balance and harmony.  And last but not least – its the story of the Mischievous Monkey King, who takes on the entire Celestial hierarchy in combat until he learns humility and forgiveness from Lord Buddha and the merciful one – Kwan Yin. 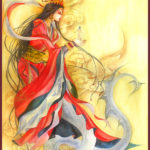 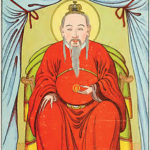 In the season 10 premiere , folklorist and mythologist extraordinare Jack “The Agnostic” Garcia examines the sacred stories of the early imperial dynasties (the Xia , Shang, Zhou and Han) who transformed China from a primitive tribal culture into a highly sophisticated civilization. First off, its a historical review of the ancient warlords and their sacred totems and talismans (like the snake and the dragon) and their importance and evolution within the realms of myth and legend. Next up its an account of the creation of the universe, The tale of Pan-Gu, the offspring of the primal Yin and Yang. Who separates  the Heaven and the Earth , and forms the World from his decomposing body.  Then its the great Mother goddess , Nu-Gua and her consort Fu-Xi , separate dieties who are transfigurated by the Han dynasty Taoists into a divine married couple- hybrid spiritual beings with human heads and entwined serpents tails that are forever locked together in an eternal embrace and divine copulation.  Last but not least , its the Celestial Gods and Goddesses (The Sun, Moon and Stars) and some of the divinities linked to the firmament .  Like the divine Archer  Yi – who takes on the Lord of Heaven’s rebellious children (The 10 Suns) who have decided to shine in the sky all at the same time causing heat and havoc for humanity.