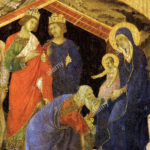 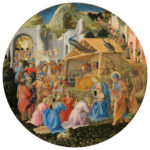 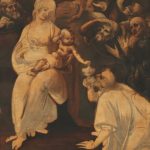 In the companion piece to season nines popular and highly acclaimed special program (The Magi and The Christmas Star) , Jack “The Agnostic” Garcia examines the adoration of the Magi as envisioned by fourteen Renaissance masters.  First off – its a historical overview of European Christian art during the Middle Ages.  From the almost glowing supernatural spirituality of the Byzantines , to the Romanesque of Northern Spain and France where dazzling frescoes and vivid reliefs brightened up the somber stone interiors.  And the highly decorative Gothic style considered by many to be high water mark of Medieval art. Jack also examines the development of the Day of The Three Kings holiday from antiquity to its growing popularity in the United States. Last but not least – Jack provides descriptive analysis of 14 Renaissance masters and their amazing artistic interpretations of the Adoration . Including such luminaries as Duccio, Bottacelli, Angelica, Lippi, Da Vinci, Durer and many more.