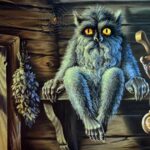 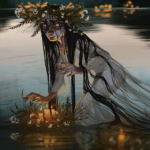 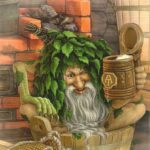 As an ode to GRR’s Slavic neighbors who live in Brighton Beach / Coney Island (aka- Little Odessa) – Jack “The Agnostic” Garcia examines the overwhelming rich and wide ranging realm of Slavic legend, folklore and myth. First off, its the Pagan Slavic Gods and Goddesses , enigmatic elemental and fertility deities whose names survived the process of Christianization but whose cultic rites and rituals remain something of a mystery. Then its the folkloric concept of the otherworld, a far off golden kingdom and a type of Heaven whose gateways are guarded by powerful malevolent beings and the concepts direct links to the far more ancient Shamanistic , trance invoked spiritual journeys that crossover into other realms. Next up, its some of the many household spirits – spectral ,supernatural beings like Domovoi/ Domovik – a gaurdian entity that prtects the home and is treated like one of the family. aswell as some of his more malevolent cousins – spectral creatures like the Bannik that haunts bathhouses , spas and saunas. And last but not least , its some of the deadly femme fatale nymphs, like Vila and the Rusalaka. Eternally young and beautiful Demi – Goddesses with long hair and translucent skin, who have links to much older forest and river dieties – and can not only lure a mortal to his death but also steal his soul.