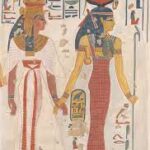 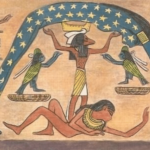 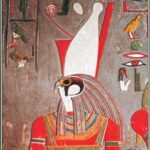 In the first installment of a special two part GRR event, Jack “The Agnostic” Garcia unveils the mystery of the greatest Goddess in Ancient Egyptian spirituality- Isis (The Winged One). First off its a few of the many Pre-dynastic Egyptian creation myths that feature a void of darkness , a Cosmic Egg, sacred Birds and Serpents, aromatic Lotus blossoms, flying eyeballs and a lonely masturbating God whose Divine Climax brings the World into existence.  Up next, its the finest Ancient Egyptian account of creation from the time of the Pyramids featuring the Nine Gods of Heliopolis – the extended and incestuous family of Isis. Primal and powerful  deities like Ra, Atum, Shu, Tefenet, Geb, Nut, Osiris, Seth, Nephthys, Horus and Thoth. Relatives and rivals who all play integral roles in the sacred story of Isis. Jack examines their complex and interwoven relationships , origins ,representations ,functions , rites and rituals.