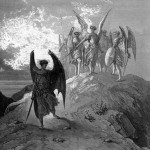 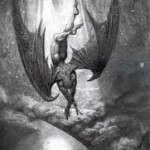 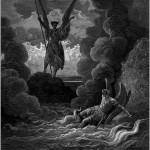 Jack “The Agnostic” Garcia continues one of GRR’s most ambitious and epic mini-series, the highly acclaimed and controversial War in Heaven. In part 3 , Jack examines the many different terms utilized within The Holy Books of the three Abrahamic religions (sheoul, hades, the abyss, gehenna, johannam etc.) and also charts the evolution of the underworld. From a universal place for the souls of the dead regardless of their moral or ethical characteristics into a place of divine punishment reserved for those who have transgressed the laws of God. Jack even takes an amazing journey to the seven Hells of Jewish mythology and Islamic lore. Next up, in a remarkable blow by blow descriptive mind movie, Jack combines the sporadic references concerning the angelic rebellion – found within these Holy books with the masterwork of the blind 17th century poet – John Milton. Whose sublime Paradise Lost – would cement the image of the celestial confrontation between the forces of light and the forces of darkness, forever into the imagination of the Western world.